So, I had the pleasure of talking with professional wrestler, Austin Aries, former WWE superstar, and widely known vocal vegan in the health food community. Whether you know him for his high-flying pro-wrestling moves or as the animal rights and healthy living advocate that he is, this interview where we talked about his new book FOOD FIGHT: My Plant Powered Journey from the Bingo Halls to the Big Time (which is described as a book "...not about veganism. It's not really about wrestling, either. It's about a decision every person has to make: Will you blindly color inside the lines that society has drawn for you? Or will you question the system, think for yourself, and have the bravery to make your own rules?"), his veganism and his future plans after the WWE, is a must read for you. 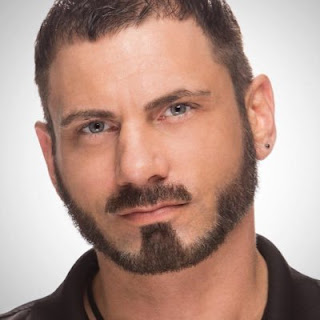 I didn't really know what to expect of talking to Austin, I mean he is a huge superstar and also has a reputation for being a badass, but to be completely honest, he was one of the warmest people I've spoken with in a while. His telephone style was real chill and laid back, mixed in with cool, smart, informed, "woke", and we laughed too. He was really easy to talk to, like an old friend that you can just sit around and shoot the breeze with. So here is what we chatted about and the questions I asked him; I bet you're dying to know!

1) What got you into wrestling and was it your first sport?

When Austin Aries was 4 years old, playing with GI Joe toys in fatigues, he recollected his first memory of experiencing wrestling, "I saw this guy come into the ring, I instantly became a fan and it consumed me", he also mentioned that when he first broke out into the wrestling world and when the opportunity presented itself, "I didn't really look back."

2) Is wrestling your passion or are you now finding your way to something else, like writing?

Austin Aries grew up playing baseball and he wasn't fully sure what he wanted to do, but when wrestling became a passion, he said, "It provided me a platform for bigger things that provides a platform to do bigger things; spread a message." He talked about wanting to get people who aren't in a healthy place to "think about what we are putting into out bodies" and start focusing more on health and obesity, especially in youth. He wants to urge kids to, "...put down the soda and pick up a pressed juice", leading us to chat about his new book.

3) Your new book FOOD FIGHT is so interesting. If you had to sum up the book to your readers, in terms of what to expect and what it means to you, what would you say about it?

"My journey came from normal circumstances and humble self discovery. By questioning what [food] is put in front of me, or, 'what is it?' and [the book] is about how I got here [as] a professional athlete on a plant-based diet; how the seeds were planted. And I want to plant seeds using my platform. It's about understanding you have a choice in your life and about your health."

4) It's so cool that you eat plant-based. How did you find this lifestyle and adopt it as your own?

He started laughing and cheekily told me the answer to that is in chapter 3 and throughout the book, so people have to buy it to find out; we both had a good chuckle. More seriously, he explained that his journey to veganism was a "learned behavior" and gave an analogy as an example, "Put me in the crib at 3 years old with a kitten, puppy, and piglet; I'm not gonna pet the kitten and make bacon, I'm gonna hug them all." He mentioned that eating meat is also a learned behavior and recalled how he grew up in a hunting environment, but as a child didn't feel right about it, it felt "weird and gross" to him. He also strongly stated that we must invest in our health and the food we eat, noting how important food is to us, but it seems like not all people are paying attention, "I see in front of me unhealthy people everywhere; at the airport food court there are shorter lines for the healthy options and long lines for the unhealthy choices. No one has ever had protein deficiency - what is the downside to improving our diets?" Amen!

5) Is your wrestling more improved since becoming an herbivore? How has your body and performance changed?

"I stopped eating meat when I started wrestling. I liked to think it was keeping the inflammation down...", then Austin's cardiologist reported to him that his results were like that of a high schooler, so he knew for sure that the "Plant-based diet is where it's at." We also discussed how there has been the same debate in the medical world, early on, about tobacco and cigarettes, and we know now that they aren't good for your health; same thing with eating meat.

Then I had to address the elephant in the room. I knew you all wouldn't let me live it down if I didn't ask him...

7) I read in the news and it was also a trending topic all over social media, that you and the WWE parted ways. In your words, what is the real scoop and what is next for Austin Aries?

*cue ALL the nervous laughter*

"No scoops, unfortunately. No scoops of cashew ice cream in my cone." BUT he did say that he has some other "big scoops" like exciting book stuff, a multi-city book tour, and a really exciting piece of news - he is acquiring a cold press juice company based out of Milwaukee that will specialize in organic yummies delivered right to people's homes! Austin also mentioned that his wrestling is on hold right now and he will focus on his book and the book's message.

8) Exciting stuff! I hope everyone gets themselves a copy of FOOD FIGHT. If you had to describe your book in 3 words, what would they be?

9) If you had to describe yourself in 3 words, what are they?

10) To wrap up, what piece of advice would you give to all of your fans, that you would want them to truly listen to, take to heart, and take away?


Austin Aries was such a nice person to talk to and the conversation was so relaxed and easy. I told him that I didn't get a sarcastic vibe from him like he describes himself and he mentioned he thought he was being sarcastic a few times in our chat; I think he's just a really awesome dude with a good sense of humor. His passion and enthusiasm about life was also super motivating and inspiring. It is always refreshing to talk with people who embrace compassion, health and veganism the way Austin Aries does. Be sure to check him out on Twitter and he has info there about his book and upcoming projects.

the Dirty Vegan
I am the Dirty Vegan. I represent everything that is vegan and exciting. I like to find ways to create the most sinful vegan cuisine, wear the hottest fashions, look the freshest, be the most glamorous, and manage to do it all without using any animal products or products that are tested on animals. Please follow me into the journey where there is a vegan substitute for EVERYTHING...and if there isn't, I will create one and show you how. Where cruelty-free is far from boring - it is downright Dirty! E-mail Me: thedirtyvegan@thedirtyvegan.com