"Anyone who lives within their means suffers from a lack of imagination".  -Oscar Wilde 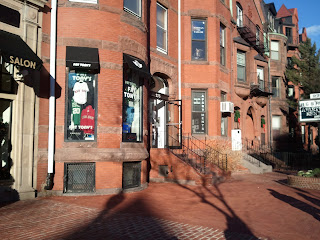 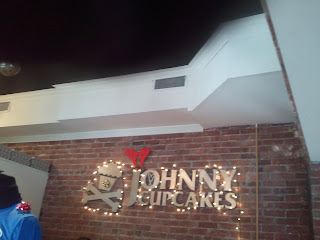 Johnny Cupcakes always has vegan cupcakes! LOL
Beginning at Betsey Johnson, I scored some cute pink lace tights and some useful vegan advice from a very helpful sales professional. I raved about the vegan friendly fashion at Betsey Johnson boutique (has some cute non-leather handbags and tons of vegan friendly items), and the saleswoman sang like a canary. I totally got the scoop on where to find the best vegan stuff on Newbury, and she was such a cool chick! She also mentioned the Hempest, but she obviously doesn't know the Dirty Vegan very well. While the Hempest's vegan and natural fashions are all well and good, it really isn't what I was looking for in terms of couture.

Next stop, Juicy Couture's chic boutique (yay I rhyme!). Juicy has really expanded their vegan options over the years. And the more you buy them, the more they will sell them. They had the cutest fleece hoodie that was so soft you would swear some innocent bunny lost his life over it...WRONG....all man made materials! They even have some canvas and pleather handbags and accessories. If you like something trendy at one of these boutiques, be sure that no animals had to suffer for your happiness (which is BAD karma), and make your values known in the stores. Trust me, it will get around. Lead by example...and your platinum charge card! If these stores sell enough of something man-made, they will make more like-items. 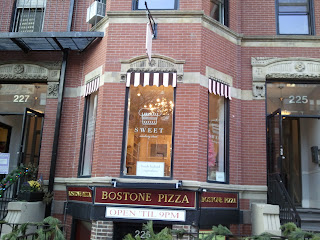 I wouldn't be the Dirty Vegan if I didn't eat every few minutes; that just wouldn't be me. One of the many beneficial tips from Betsey Johnson's sales gal, was a bakery called Sweet Newbury Street. They have some vegan options for cupcakes and select goodies. I enjoyed this yummy Vegan Chocolate Cupcake. The frosting was OUT OF THIS WORLD! Best vegan icing I have ever tasted. Rich, creamy, sweet, and perfect. The nice gal who worked there also helped me take the photo and was really cool. Too bad the whole bakery wasn't vegan...I would have purchased so much more! 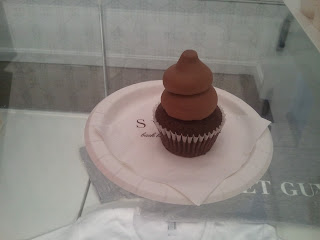 If you would like to be beautiful on Newbury Street, there are several cruelty free options. MAC Cosmetics does not test on animals and has great stuff. Also, my personal favorite, Lush! Lush stuff is all natural, handmade, and mostly organic and vegan. Lush does not test on animals. Trust me, once you step foot in a Lush store, you will be addicted, I don't even have to go any further with it, just trust me.

After a long day of shopping out in the cold (burning mega calories, I assume), it was time for lunch. Newbury Street eateries have vegan options in almost every single one. Boloco is a fresh burrito joint that will make yummy burritos however you like them. Lots of vegetarian options right there. Thai Basil is a Thai restaurant that has amazing veggie options and a nice chill atmosphere. It is a hidden gem since it is lower street level, so look for it. I have eaten on Newbury so many times, and have found vegan options at each restaurant I tried, so please don't fear. If you don't see something already made vegan on the menu, just ask and most likely you will receive. 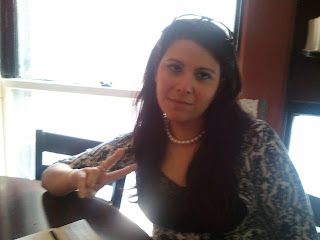 Give Peas (and Peace) a Chance!
We finally decided on Other Side Cafe. Super trendy bar and restaurant located on...wait for it...the other side of Newbury. The atmosphere is chill, anti-establishment, and very rock-n-roll. The music is awesome too. The food is even better! Pretty much everything on their menu can be made vegan (little "v" next to things that they can make vegan). They make vegan BLTs, grilled cheese, chili, raw dishes, and tons of vegan desserts! The desserts range from bon bons, cheesecake, to delectable chocolate mousse. This place is truly amazing and has something for everyone. 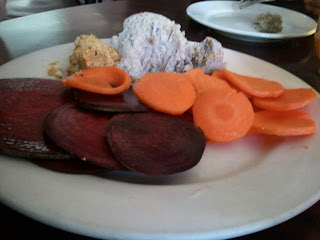 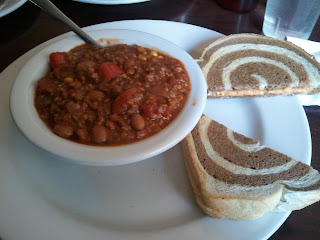 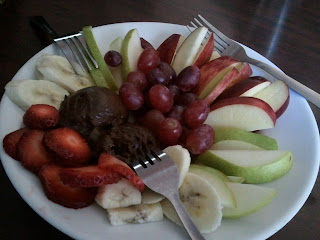 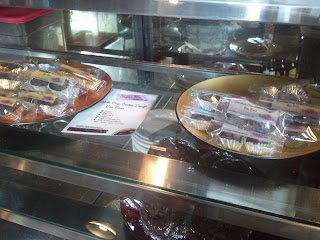 Vegan Bon Bons! Woah!
So whether it is cruelty free fashions, treats, eats, or cosmetics you are after, Newbury Street in Boston has it all! Such a cool place that welcomes the vegan diva in us all! Happy shopping Naughty People! For now, the Dirty Vegan is signing off...
﻿
Posted by the Dirty Vegan at 10:03 PM

the Dirty Vegan
I am the Dirty Vegan. I represent everything that is vegan and exciting. I like to find ways to create the most sinful vegan cuisine, wear the hottest fashions, look the freshest, be the most glamorous, and manage to do it all without using any animal products or products that are tested on animals. Please follow me into the journey where there is a vegan substitute for EVERYTHING...and if there isn't, I will create one and show you how. Where cruelty-free is far from boring - it is downright Dirty! E-mail Me: thedirtyvegan@thedirtyvegan.com